Studio Tablinum: He was the most handsome god of the Olympus. Amongst the Olympian deities, Apollo had harmony and grace, he knew how to play music and the Muses, goddesses of song and poetry, belonged to him. He could also be violent and his vengeances were very cruel.

Son of Zeus and Leto, he was born when his mother, tired of escaping from Hera, jealous of her husband’s umpteenth fling, sought refuge in Ortygia. As a gesture of gratitude, Apollo placed the island at the centre of the Ancient Greek world and renamed it Delos. He and his sister Artemis, goddess of hunt, were brought forth under a palm and the father Zeus received them with splendid gifts.

The Sun itself was his symbol and other animals such as the swan, the raven, the cicada, the snake and the wolf were also sacred to him. He also had an incredible talent for archery.

Apollo was worshipped in different parts of Ancient Greece, particularly in Delphi. Another epithet was Phoebus which literally means “bright”. 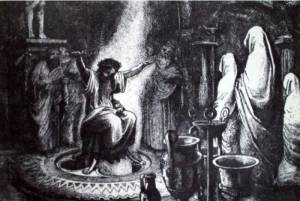 Since he was young, Apollo had a combative and intense life, one of his most heroic adventures was the killing of the dragon Piton who had tried to rape Leto, while she was already pregnant. Apollo found the dragon in his cave, near Delphi, where the god was worshipped and it is no coincidence that the priestess of his cult, Pythia, was also called Pythoness. 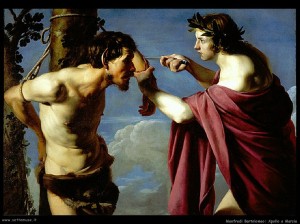 Satyr Marsyas was the victim of one of the most cruel among Apollo’s revenges. Marsyas boasted about his musical skill on the aulos, claiming that his ability was far superior to that of Apollo on his lyre. He challenged the god to a musical contest: the Muses were the judges and the terms stated that the winner had the right to treat the losing rival any way he pleased. The contest started and then ended in a tie. Apollo could not accept such a result and invited the Satyr to play his instrument upside down, Apollo’s lyre was perfect to be played but Marsyas was not able to blow into his flute and lost the competition. Apollo’s punishment did not take a long time to happen: Marsyas was pinned to a tree and flung alive. 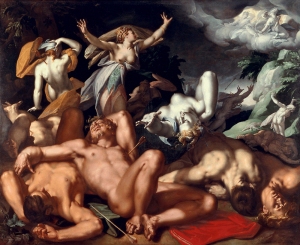 Another terrible action involved the queen of Thebes, Niobe, who bragging about her seven daughters and seven sons dared to mock the mother of the sun-god, claiming that she had only a son and a daughter.

The divine children were skilful archers and used the arch that Zeus had given to Apollo to slaughter Niobe’s offspring; only two were spared and Leto’s honour was saved. 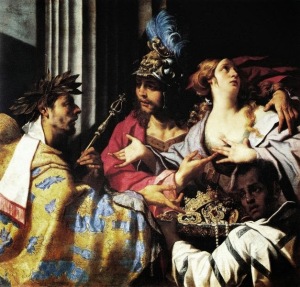 During the ten-year battle under the walls of Ilium, Apollo was always on the Trojan side. An episode risked to compromise the Greek conquest of Ilium: as they first landed on Trojan shores, the Greek imprisoned the beautiful Chryseis, daughter of the soothsayer Chryses. When the father  attempted to ransom her, king Agamemnon refused, mocking and chasing him away. The heart-broken priest prayed to Apollo in order to make the Greek king change his mind. The angered god accepted Chryses’ prayer and fling a rain of darts on the Achaeans’ camp. Only when Chryseis was returned to his father, the darted rain ceased. 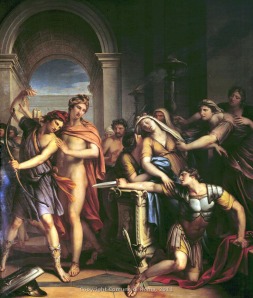 To be honest, it was not the only time that the god interfered in the warriors’ adventures: Achilles himself died as Apollo diverted the arrow that the Trojan prince Paris had thrown against the hero’s only point of weakness, his heel.

Apollo undoubtedly was a violent god, but his nature urged him to compensate such brutality with gestures of great magnanimity: it was not rare to see him forgiving men who had committed murders; he acquitted even Orestes who had killed his own mother Clytemnestra.

He was a deity who could cause the most terrible plagues and halted them at once. 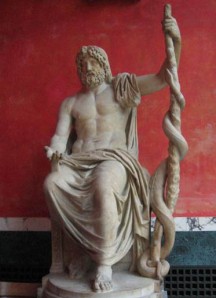 One of his most eminent sons was Asclepius, the god of medicine, he was the son of Apollo and a mortal woman, Coronis. He was a peerless healer in the Classical world, but unfortunately, his knowledge originated from a tragic event: when Apollo became aware of Coronis’ unfaithfulness, he killed her cutting the baby she was carrying from her womb and gave him to the wise centaur Chiron. It was Chiron who instructed Asclepius in the art of medicine. Throughout his life, the god became so proficient to the point that not only could he heal people, but he could also bring them back to life, breaking the laws of Fate and Cosmos.

Zeus resorted thus to kill Asclepius with one of his thunderbolts. He was remembered as a healer as well as a benefactor, and at Epidaurus a sanctuary in his memory was erected. 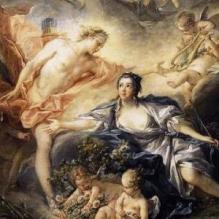 Taking after his father Zeus, never were Apollo’s loves trivial. He turned himself into a turtle in order to seduce the nymph Dryope, and he chased her into the wood where she was accustomed to play with her friends. The curious Dryope put the animal on her lap which turned again into the god and raped her.

Nymph Daphne was luckier, whilst escaping from Apollo, she prayed the gods for being transformed into something less attractive to the sun-god’s eyes. The gods granted her wish turning her into a plant that we still admire for its beauty, the laurel.

Princess Marpessa loved the brave Idas and was loved in return, but Apollo himself was intrigued by the girl’s beauty. After a long and merciless duel, the two rivals were still even. Zeus intervened giving Marpessa the possibility of choosing between her mortal lover and the god. Marpessa chose Idas, reasoning that the god would not have stayed by her side for rest of her life, and would have vanished as soon as the first wrinkles had appeared on her face.

One of the most passionate loves of Apollo ended tragically. Hyacinth and the god were inseparable, both handsome and athletic, they loved throwing the discus. During a challenge, the sun-god threw the discus and accidentally hit his lover on the neck. Hyacinth fell to the ground and died. The god never forgave himself and from the youth’s blood, a bright crimson flower bloomed, the hyacinth.

Greek loved and feared Apollo, particularly for his ambiguity, handsome and cruel as he was, capable of great gestures as well as despicableness. However, on his chariot of fiery horses, he carries the sun giving light to the world every single dawn.

Next month we will be dealing with the adventures of the goddess of hunt, Apollo’s sister, Artemis.