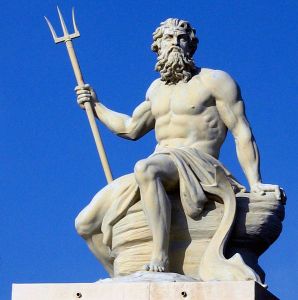 Studio Tablinum: Poseidon is the blue god, the god of the sea, rivers and earthquakes. Among the twelve Olympus was Poseidon, son of Titans Cronus and Rhea, who with his brothers Zeus and Hades represented the most important divine triad. He hugely contributed during the Titanomachy which involved the second and third generations of deities. The weapon of the Sea-god, a trident, was forged by the Cyclops and with his brothers, Poseidon won the war against the Titans. They were hurled in a bronze-walled prison at the centre of the Earth, the Tartarus, which Poseidon himself built.
Major cults to the Sea-god are known in Mykonos, Corinth and many cities of Magna Graecia; in Athens, he was second only to Athena in importance. Every year, the Isthmian Games were dedicated to Poseidon and seafarers worshipped him with prayers and sacrifices, drowning horses was the most common practice. In Classic iconography he is represented holding his trident, on a gold chariot pulled by hippocampus and surrounded by dolphins.
Poseidon dwells with his beautiful wife, the Nereid Amphitrite, in a palace of corals and shells, in the unfathomable depths of the sea. 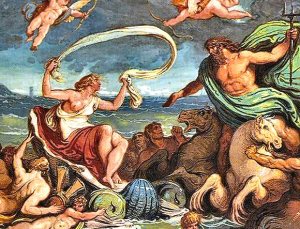 Their son Triton was a merman, half man and half fish, often represented in marvellous statues and water games, he held a conch shell, on which he blew to calm billows as well as tempests. He was always his father’s herald, following him everywhere. It was remarkable the way he unconditionally helped the hero Jason and the Argonauts find the route on their ship Argo.

The Sea-god also had other sons outside marriage, who were not as benevolent as Triton. The Cyclops Polyphemus, for example, who devoured Odysseus’ fellows during their imprisonment, the bandit Sciron who was killed by Theseus and the cursed hunter Orion, killed by a scorpion which the revengeful goddess of hunt Artemis had sent.

One day a young hero, Theseus arrived at this submerged palace. He was the king of Athens and it is thought to be one of Poseidon’s sons. He headed to Crete, in order to challenge the Minotaur, bull-headed creature with a human body. Minos, king of Crete, accused Theseus of lying about his divine origins and challenged him throwing his ring into the sea: if Theseus were the Sea-god’s son, he would have retrieved it easily. Without thinking twice, Theseus dived into the sea and with the help of some dolphins, he reached his divine father’s palace where he received several gifts, amongst them there was King Minos’ ring. Theseus came back to the surface holding the ring which was given to the incredulous Minos.

The God of the Sea could be generous to his protégés as well as cruel to his enemies, Minos himself had experienced the god’s fury. The king had failed to an agreement with the Sea-god: the latter had sent him a prodigious bull to be sacrificed to honour the god, celebrating his greatness and Cretans’ loyalty. The king sacrificed a common bull, hiding the one that Poseidon had chosen. Poseidon planned a sly and elaborate revenge: he drove the king’s wife Pasiphae mad and made her fall in love with the prodigious beast. Urged by this insane passion, she requested the help of Daedalus, the court craftsman, who built a wooden cow where she could hide and mate with the animal. From this union, a monstrous creature was conceived, the Minotaur which was promptly put into the labyrinth that Daedalus constructed in order to hide the monster from the terrified Cretans’ eyes.

The God of the Sea had a sacred animal, a noble animal that soon mankind learned to tame, the horse. It was the most famous horse in history, Pegasus, which is even thought to have been generated by the God himself, during a fleeting encounter with the most terrible of the Gorgons, Medusa.
When the semi-god Perseus defeated the monstrous creature by cutting its head off, Pegasus arose from the blood gushing out of the wound. Poseidon himself loved to occasionally turn into a horse and ride at breakneck speed.
And so it happened that Poseidon, fallen in love with Demeter, the Goddess of the Harvest, tried to possess her, and the goddess, in the attempt to escape, turned into a mare and hid herself among a horse herd, but the god of the sea immediately recognized the Goddess of the Harvest and, after turning into a strong stallion, mated with her. A mysterious daughter was born of this union, but her name was not handed down to us, for no one should pronounce it.
This forced marriage also generated another horse, a horse that was not as famous as Pegasus but just as prodigious: Arion, the horse that could speak like a man. It was mounted by the epic hero Adrastus during the War of the Seven Against Thebes.

Poseidon was known to be the most irascible and revengeful god among the Olympians. He was prone to stir storms and earthquakes for no reason, but he was most notably triggered by sensing a lack of faith in him among men.
That’s no news to the heroes of the Trojan war, especially to Ulysses, forced to roam the seas for ten long years before he was able to return to his beloved Ithaca.
A terrible fate was also waiting for the hero Ajax Oileus, who escaped from a storm during the journey back from Troy, made it close to Mykonos and dared say that it was his own strength that had saved him. Poseidon heard him and, burning with anger, grasped his Trident and flung it on the rock upon which the survivor had found salvation.

The rock was torn in half and Ajax fell into the sea, drowning. If you ever find yourself nearby, remember that the remaining part of the rock can still be seen appearing on the surface.

Poseidon had a quarrel with Athena, the Goddess of Wisdom, as well. The reason was the dominion over the City of Athens. It is told that an olive tree sprouted in the city and at the same time water began to flow. Since the olive tree was Athena’s holy symbol and water was Poseidon’s, how to decide which deity should be the protector of the city?
King Cecrops decided to solve the issue democratically. He gathered all the citizens and asked them to vote: men voted for Poseidon while women voted for Athena. The goddess won and she gained dominion over the city, which was called Athens ever since.

Poseidon, angry at the women of Athens, ravaged the crops that surrounded the city and that led to all the men punishing the women in order to appease the God of the Sea. From that moment on women were not allowed to vote anymore, no son could be given their mother’s name, and no daughter could be named after the Goddess of Wisdom.
Nevertheless, Poseidon had his share of defeat. It happened that the Olympians, tired of the undisputed domination of Zeus, decided to start a rebellion. The leaders of the rebellion were Hera (Zeus’s wife), Apollo, and the God of the Sea. Zeus was deceived and tied up, but he was eventually saved by Thetis, a Nereid, and Briareus, who had detected the revolt against the Father of Gods.
All the gods involved in the rebellion were gathered together.

Poseidon was banished and sent to serve the King of Troy, Laomedon, who had Poseidon build the great wall surrounding the city. When the work was done, the king refused to pay Poseidon the promised fee.
Poseidon was furious and he conjured up an enormous sea monster that came out of the water. The king, frightened, summoned the oracles, who told him that the only way to appease the god was to sacrifice his own daughter, young Hesione. King Laomedon was ready to make the sacrifice, when the semi-god Heracles came to his rescue and killed the sea creature, setting the city of Troy free.
This event became the cause of the God of Sea’s hatred for Troy and his everlasting support for the Achaei.

We are dealing with an extremely fickle deity, feared and worshipped by the entire Greek world.

He was inclined towards both generosity and great violence. And if we take into account the extension of the sea, Poseidon’s domain, it goes without saying that our god demanded respect.

Next month we will be focusing on the most beautiful and cruel Olympian god, Apollo.